The many faces of Senator Dianne Feinstein

“Old Guard” Democrats don’t come much more entrenched than Dianne Feinstein.  She has been a public servant, since the 1960s.  The 79 year-old senior senator from California was a former president of San Francisco’s Board of Supervisors and former mayor.  Feinstein appears to be a San Francisco icon.  Just as the king in a chess match is taken down, this year Senator Feinstein will be checkmated in her quest for a fifth term.

Feinstein puts on the charade of being a centrist yet she follows the Democrat party close to 96% of the time. The insidious manner is which she carries herself must remind those who attempt to deal with her, Caveat emptor, she is not to be trusted as her ethical breaches enriching her husband’s personal wealth attest. Then again what’s $25 billion among friends? 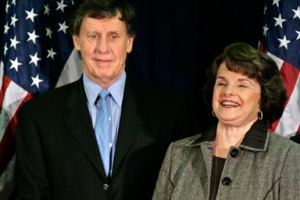 She can be trusted to vote with RINO Republicans like Lindsey Graham, (RINO-SC) and the soon departed and recently defeated Dick Lugar from Indiana to vote for bipartisan scheme that will raise taxes and grow a larger more intrusive and bloated federal bureaucracy.

A look at her voting record on virtually every major expansion of government power in the last 10 years, including, Sarbanes-Oxley, the 2008 Emergency Economic Stabilization Act (which created the notorious Troubled Asset Relief Program) TARP, the Patient Protection and Affordable Care Act (a.k.a. ObamaCare), and Dodd-Frank, further demonstrating she is an excellent follower and rarely a leader.

She voted no on  Keystone XL Pipeline Project, no on  Disclosure of Financial Transactions by Executive Branch Employees, no on  Consideration of Bills Prohibiting Earmarks, no on  Disapproval of President’s Authority to Raise the Debt Limit and no on Proposing a Balanced Budget Amendment to the U.S. Constitution (Hatch Bill) These votes were made during the end of December 2011 thru March of this year.

What she told her constituents with her votes was, on the Keystone pipeline she will continue to pander to her environmentalists preferring to kill 20,000 jobs and keeping the United States beholden to foreign oil.

Seen with her tax and spend sister Barbara Boxer both of whom have never seen pork or tax hikes they didn’t adore.

On “Earmarks,” she knows without them her constituents in the Bay area would abandon her.

Her no vote on disclosing financial transactions of the Executive Branch signaled she is in agreement with the president’s off stated lie about having his administration be “The most transparent administration in history.”

Feinstein can be counted on to put on the short pleated skirt and bring out the pom-poms as she is one of the presidents biggest fans.

Of course she would vote against a balanced budget amendment just as she voted with her signature nay on the presidents own budget following the rest of her friends in the party dealing the president an embarrassing zero votes on his budget.

Feinstein’s inside the beltway status will be a major liability during the 2012 election Historically during times of financial instability, the center breaks from the incumbent or doesn’t vote at all.

The year 2012 will be remembered as the year of the great awakening, the voters will turn against Mrs. Feinstein as they now know her agenda is synonymous with higher taxes businesses closing or leaving the state with resultant lost jobs.

Diane Feinstein has a staff of more than 80 people with a payroll of more than $4 million a year, much larger and more expensive than most Senate staffs.  It would seem that she sees herself as royalty. Feinstein rarely has time for her constituents; most of all, her contact is a reply to their concerns using  a boilerplate Email rarely addressing the question at hand.

Senator Feinstein’s need for a staff of 80 makes little sense. Rather odd for a U.S. Senator who is viewed by many as holding a ceremonial position, not one she feels the need to become fully immersed.  If she leads at all on issues of significance it is from the rear. 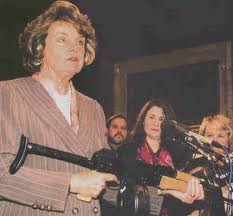 Feinstein carries a license to carry a concealed weapon, she clearly didn’t learn much in the process as one never put their finger on the trigger unless the are ready to use the weapon.

The only serious legislation she has put forth is to strip the nation and Californians of their constitutional right to bare arms while she continues to challenge The Second Amendment. California has the strictest gun laws in the nation.

Feinstein has been a US senator since 1992, for  four terms and now she seeks a fifth.  Californians deserves more, the United States deserves more from Mrs. Feistein.  Is it too much to ask of our legislators to be up to date on the current issues of the day and work for the people not against them?

Senator Feinstein would have done well to learn the meaning of the Latin phrase known well by every first year medical student, Primum non nocere.”

Dianne Feinstein has been “Too Wrong for “Too Long” thus, making Elizabeth Emken the best candidate to face and replace her. Remember, during the June 5 primary vote Elizabeth Emken, the only E on the ballot, then on November 6th out with the old and in with the new, Elizabeth Emken for United States Senate.